Geraldyn “Jerrie” Cobb, record-setting pilot and advocate for women in spaceflight, died on March 18, her family reported in an April 18 statement.

Cobb was best known as a member of the Mercury 13, a group of female pilots selected to undergo the same battery of physical and psychological examinations as NASA’s first batch of (exclusively male) astronaut candidates. Cobb scored in the top 2% of all candidates, including the Mercury 7 astronauts. The program wasn’t NASA-sanctioned, but was the project of Randolph Lovelace, the flight surgeon who had led the development of NASA’s medical requirements for astronauts (and sponsored in part by Jacqueline Cochran, the first woman to break the sound barrier). Lovelace suggested that women might be physiogically just as well suited, if not even better suited, to the rigors of spaceflight and microgravity compared to men.

Like Cobb, the other 24 women selected for Lovelace’s program were all experienced, highly qualified civilian pilots. They called themselves the First Lady Astronaut Trainees, or FLATs, and 13 of them passed the first phase of tests. Three, including Cobb, went on to the second phase of tests, which were mostly psychological; several others had to back out at that point because family and work obligations kept them from travelling for the tests. The program ended suddenly in 1961, the same year Cobb became a consultant to NASA administrator James Webb on the possibility of women in space. 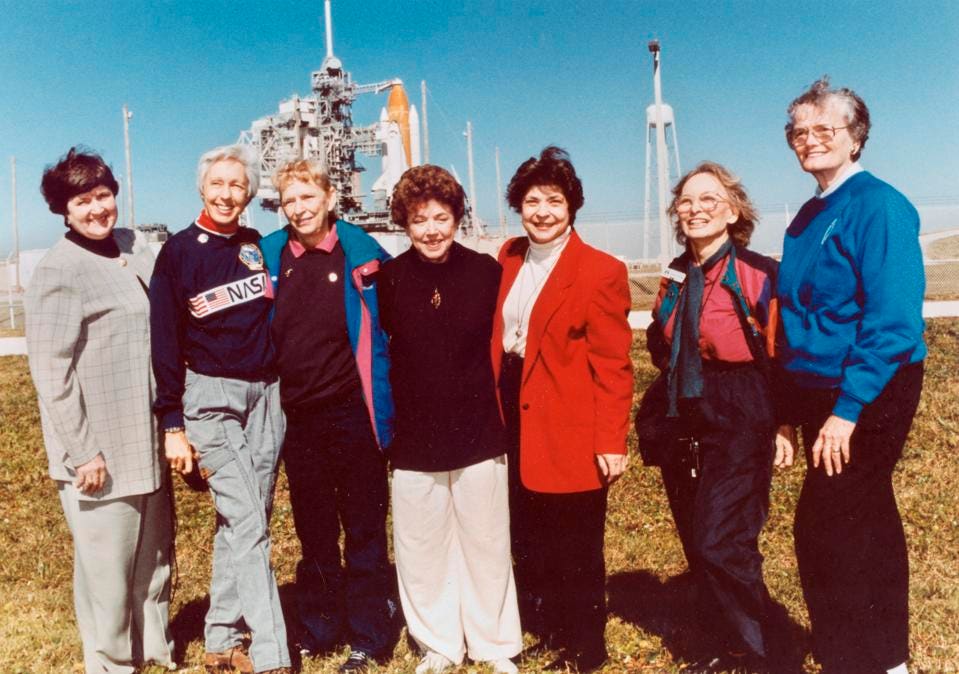 In this 1995 file photo, members of the FLATs, also known as the “Mercury 13,” gather for a photo as they attend a shuttle launch in Florida. From left are Gene Nora Jessen, Wally Funk, Jerrie Cobb, Jerri Truhill, Sarah Rutley, Myrtle Cagle and Bernice Steadman. They were the invited guests of space shuttle pilot Eileen Collins, the first female shuttle pilot and later the first female shuttle commander. Cobb, NASA’s first female astronaut candidate, died in Florida at the age of 88 on March 18, 2019. (NASA via AP)

When she joined the Mercury 13, Cobb had already logged over 7,000 hours and held the 1959 world record for nonstop long-distance flight, the 1959 world light-plane speed record, and the 1960 world altitude record for lightweight aircraft. She had been flying since the age of 12, and had earned her commercial license by the time she turned 18. She spent her early 20s crop dusting, patrolling pipelines, dropping showers of advertising leaflets on small towns to announce circuses, and instructing student pilots — anything to keep herself in the air. From 1952 to 1955, she ferried military aircraft, from fighters to AT-6 trainers and flying boats to B-17 bombers, to militaries around the world.

But as qualified as she was, Cobb had never flown experimental military jets. At the time, NASA required its astronaut candidates to be military test pilot, and (with notable exceptions during World War II), that requirement may as well have said “men only.” The U.S. Air Force Test Pilot School didn’t accept its first female pilot until 1982.

This article originally appeared on forbes