Skip to content
Home
/
The Happiness Beach: One Man’s Journey To Happiness In Spain

In the end, we tend to regret the things we didn’t do, the opportunities missed, the risks not taken. Yet, in the day-to-day, the familiar is comfortable and too often holds us back. We stop ourselves from pursuing our ‘crazy ideas’ and walk the worn path toward traditional ideas of success. 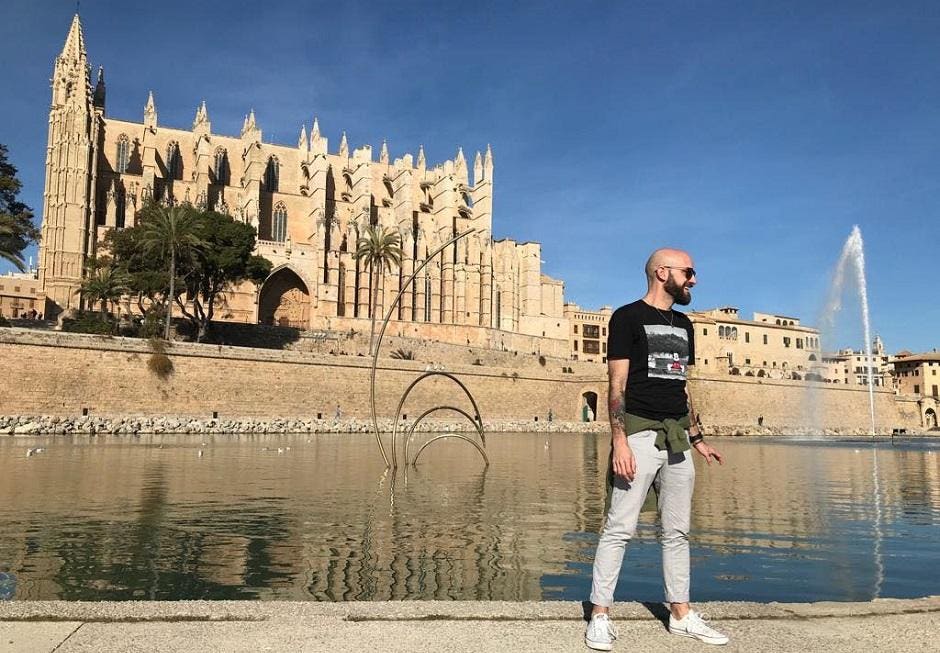 But what if success is less about wealth, status or fame and more about living authentically? What if taking a leap could help you discover the real you? Don’t you owe it to yourself to try?

On this episode of Queer Money®, we’re joined by Justin McCarty who, in his mid-thirties, left family, friends and job security in Denver Colorado and moved to Barcelona Spain. He says, “I’m definitely experiencing a level of happiness now that I had never dreamed was possible.”

McCarty shares how what seemed like a whim is the best life decision he’s ever made.

Learn how McCarty made and succeeded with his big move:

Who is Justin McCarty?

Justin McCarty was living in Denver Colorado, working 10 to 12-hour days six to seven days a week at his job of 12 years at a home improvement company. He thought that’s what life was.

McCarty made a lot of money and, consequently, could pay to do what he wanted when he wanted. The drawback was he didn’t have a lot of free time. When he was off work, he was rarely completely off. He was often tethered to his cell phone, taking calls and checking emails.

McCarty had his own apartment, a car, and was nearly ready to buy a home. So, other than not owning his own home with a white picket fence nor being married, McCarty was on his way to achieving the American dream.

At this time, he would’ve ranked his qualify of life at 8.5. He had great friends. He was surrounded by family. He had a good job and the income to do what he wanted.

Why does Justin’s story matter?

McCarty was living the life many live and of which many dream. Then, he felt his priorities change when he took his first trip out of the country.

Four years ago, McCarty made his first trip to Barcelona and was struck by the difference in culture between Spain and the U.S. While there, he thought, “This is life. This is what people should be working toward.”

He realized that the new car and the Christian Louboutins weren’t so important. Culture, people and balance in life mattered more. These and many other aspects of Barcelona inspired a mental shift in McCarty.

After living in Barcelona for over a year and a half now, McCarty would estimate his quality of life in Denver at a 5, and he’d say he was “more content rather than happy.” That happiness, McCarty says, comes from his ability in Barcelona to have a better life balance.

McCarty finds happiness now in grand things like architecture and art and in little things like reading and learning the names of streets. “There’s been this weird shift in balance where I was looking for outward approval for my happiness, rather inward. And now, with more free time, I’m able to do things I really enjoy.”

McCarty’s former mindset was focused on “going on expensive vacations and buying nice shoes.” These, he thought, were his source for happiness. He says someone complimenting his shoes was validation. In hindsight, McCarty says, “I was too dependent on the opinions of others and a false sense of happiness.”

The LGBTQ community is still a community fighting for equality. Sometimes equality is confused with being “normal,” and sometimes pursuing normal can trap us in pursuing traditional ideals of success, such as the fancy cars, the houses and all the stuff.

McCarty’s view is that these are American pursuits. As boys, we’re taught that success means “having a wife, a house, two kids, a dog and a cat – all the Census things.” Then, as gay men, “we magnify this definition of success because we can’t just want a house. We need a freshly renovated house with a European-style kitchen and three floors and a new Tesla in the driveway because, as gay men, everything needs to be more. We’re competing for validation.”

It’s as if to say, “Yes, we’re gay, but look how successful I am in spite of, maybe even because of, being gay.”

During McCarty’s third visit to Barcelona in three years, while standing in the Mediterranean Sea, a sense of liberation overcame him. He said to his travel companion, “I’m moving here.”

How did McCarty legally move to Barcelona?

“Living as an expat in Spain—it’s not an easy process. It’s a difficult process and you have to be really determined,” McCarty says. He continues, “You have to be 100% sure this is what you want because it’s time-consuming. There were some moments when I thought, ‘What am I doing? This is way too much’”

Fast forward a year and a half later, “This is the best decisions I’ve ever made.”

First, McCarty applied to school in Barcelona. In order to legally live and work in Barcelona, he applied for a long-term student visa. This meant he had to be studying for more than 180 days at a time.

In school, he first took “Teaching English as a Foreign Language,” which was a four-week course. He then took a “Developing Teachers” course for nine months. The latter course gave him a chance to improve his Spanish

Then, after completing his courses, McCarty got a job. Getting his first job McCarty attributes to being in the right place at the right time. When picking up his grades, the Director of Studies at his school asked about McCarty’s intention to stay in Barcelona. He responded that he hoped to stay. She then offered him a job teaching at the school. Knowing a job would help guarantee his ability to legally stay in Spain, McCarty accepted the offer and started work the following Monday.

In hindsight, McCarty realizes that it was, in part, that he set up a language exchange sponsored by his school at a local restaurant that impressed the school’s director. The exchange, he shares, was really to expedite his learning of Spanish and because the restaurant offered him free beef if he brought with him enough students.

McCarty makes clear that he’s not independently wealthy and couldn’t buy the privilege to live in Spain. His “luck” is really preparation meeting opportunity. McCarty’s story is an inspiration for those who want change but feel they don’t have the financial means to make change happen.

Tenacity and action can compensate for little means.

How did McCarty leave his life in Denver?

Making the decision of where one might move internationally is one thing. It’s something else untying the reins of current situations that makes people stay still. Looking back, McCarty executed on a series of little steps that accumulated to big leaps toward his big goal.

First, McCarty negotiated with his landlord the terms under which his lease would end. Then, “I had my American Justin estate sale,” he says. McCarty continues, “I was letting go of the American ideal of Justin.”

For a week on his front law, he sold his artwork and furniture, televisions, clothing and countless pairs of shoes. As he sold each item, McCarty felt he was letting go of a former version of himself.

To move to Barcelona, McCarty initially took two suitcases with summer clothes and photos and some sentimental items knowing he’d return to The States for Christmas and could get his winter clothes. McCarty was surprised, however, that between June when he moved to Spain and December when he returned to the U.S., he lost 40 pounds.

McCarty’s weight loss inspired another sale, this time of his winter clothes, which gave him more money to help make ends meet in Barcelona.

What advice does McCarty have for anyone considering following in his footsteps?

First, decide where you want to go. Second, do your research to make sure you don’t go through the entire process of moving, including selling your things and quitting a job, before deciding a move isn’t for you.

Third, he suggests, saving your money. You can’t save too much moneybecause many people who move to another country don’t find a job as easily as McCarty did. That said, don’t let not having enough money to fulfill your dream be a perpetual excuse.

If he did it over again, McCarty might’ve stopped working in the U.S. two weeks prior to his move rather than two months prior. In hindsight, the extra money would’ve helped him get by easier during his initial time in Barcelona.

Next, McCarty advises future expats to be open to the culture they’re asking to adopt them. He shares, “You are a visitor in their culture. If you want to acclimate, acclimate. If you feel you can’t acclimate, don’t move.” For example, McCarty found just trying to speak Spanish when his Spanish was still broken helped build relationships.

Finally, McCarty tells our listeners to just do it. “If you think this is something you want, do it.”

On returning to the U.S., McCarty says, “Probably not anytime soon. I’m just starting to get to know the real Justin.” And, we all owe it to ourselves to do that.